Screening Test takes place on the very first day of reporting at Services Selection Board (on second day for those who reports in afternoon around 1400hrs) which is a nightmare even for Recommended candidates, but don’t worry just follow some basic rules you can clear it easily. The screening test is a test which is to sort out the candidates which are suitable for phase II testing, it is an elimination tests. Once you cleared it and got Screened-In then you will stay for at least four more days at the Center. Before the screening test starts you will get Chest Numbers which will be your identity during the selection process thereafter and don’t do the mistake of calling your friends by their names, call their Chest Number, the Chest Numbers are given to you to make all of you feel equal.

Important – First day you will find a lot of so called LEADER type candidates, they are well known about SSB Interview. These kind of candidates dominate over you and make your moral down specially in case of fresher’s, so you must avoid talking to such candidates, if you get screened in, you will get that all of those candidates have disappeared.

Let us discuss the tests in detail.

This test is aimed to judge the Intelligence of a candidate. In this test you will get  Verbal and Non Verbal test booklets which you have to solve in the given time, you have to solve as many number of question as you can. The number of question are generally 50 and time given to you to solve them is 25 Minutes. You must practice this test as time given to you is very less but enough.

There is No Negative Marking In Verbal and Non-Verbal tests so try to attempt all questions.

Officer Intelligence Rating is a test of intelligence of a candidate. There are two test booklets, each booklet have around 40 (sometimes 50) questions for which you will be given 20 Minutes time (will increase for 50 questions). You must give it a try to solve all question in the given time.

Usually candidates talks unnecessarily about marking scheme of OIR that is if that much questions are correct then OIR 1 or others. But you must avoid any such talk as you can’t control these things but you can surely perform your best so focus on that.

The Questions in this test are easy enough that even a 10th grade student can do all of them correctly, but time is the main factor which matters the most so match up yourself with time limit.

No. of Questions in Each Booklet- 50

Time For Each Booklet- 25 minutes

“Watch is not allowed in any test at Service Selection Boards.”

Instructions are very important for all the test so You must listen to each and every instruction given by the Instructor who is conducting your test, before actual test starts they will also conduct a practice test to make you familiar with the test.

In the test your imagination and communication skills will be checked. You will be shown a hazy picture for 30 seconds and you have to write a story on that picture within 4 minutes which will be followed by Individual Narration and Discussion within a group of 15 to 25 candidates.

Detailed PP&DT – PP&DT is the second test in the screening series. The test contain two parts first is picture perception and the second is discussion test.

A picture shown to you for 30 Seconds and picture will be very hazy, after that will be given 1 Minute to write the credentials like Age, Mood, Sex of all number of character you have ssen. Action part is to fill by outline of your story in one line.

There are so many candidate in doubt of language so it is very clear that you can use Hindi & English both languages but English is preferable language. Do not think more just write down the thought first coming in your mind.

Your story requires these points.

In 5:30 minutes PP will be finished

Discussion Test – All candidates will be divided in small small groups of 15-25 candidates depending on the strength of candidates reported. Every candidate will narrate his story individually. You will be instructed for narration. So listen the instructions very carefully. As you will enter in the discussion room your PPDT sheets will given to you to recall the story you have written after that you have to submit it at the end. While narrating individual story, the  Language to be used for narration must be English but if you gets stuck somewhere you can use Hindi but switch back to English As soon As Possible and within 40-60 Seconds you have to complete your story, as soon as the last candidate finish his story the Discussion Starts.

So peacefully we have said that the discussion starts but dear if you never visited the Fish Market then after the discussion you will get to know what fish market is all about. Everyone out there will be trying to convince someone but to whom is not known as everyone will be speaking. And you will be an exception case if you say that your discussion went on smoothly. If large number of candidates are speaking at a same time then the assessors generally divides the whole group in two parts which reduces the number of fish sellers but the fish market goes on. The purpose of the discussion is to form a common group story and in the end all of you have to decide one candidate to narrate the group story. For discussion the time is 20 Minutes but they kicks the group much early as they have just two poor ears to listen and they don’t want to loose them. However at the end they show the courage to say that “Gentleman it was a nice discussion“.

After that you can pray to God to get Screen In and wait for the Result.

Note – Those who fail to qualify in the first stage are sent back on the same day and those who qualify they are retained for stage II testing, however by no means getting screened out reflects your potential, even recommended candidates get screened out. So, friends don’t get disappointed by getting screened out, improve yourself and come back with a bang and get selected. Our Defence forces are waiting for you. 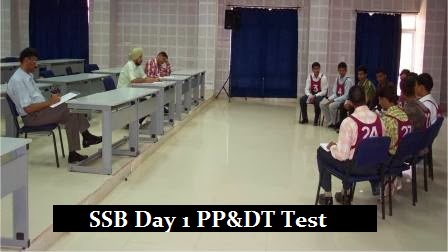